In short, there are lots of us writing quick jokes on Twitter (or memes on Facebook and Instagram) and a LOT more people taking our original jokes/words to use without permission or credit.

Some do this because they simply don’t know better. Many others do this to pawn them off as their own in order to gain followers/fans, or to put on merchandise to sell/profit from.

SPOILER ALERT: those of us who actually WROTE those words never see a penny from them, and lose out on both fans and career opportunities when this happens.

Example #1:
In 2012 I wrote a one-liner on Twitter that said, “Coffee: A warm, delicious alternative to hating everybody every morning forever.” Since then, I have seen it used on hundreds of items from mugs to tees to wooden signs on Ebay, Etsy, Amazon and other shops. The people who run those shops earn money each time they sell something with MY words on them. I try to message these people, but mostly my requests to remove the items from their shops are ignored. Uuuuugh.

Go ahead and put that tweet into the search box on Twitter and look at how many people copied/pasted it to use as if they were the ones who thought it up, then scroll through 4+ years’ worth of people who have the cajones to promote items on Twitter that they sell with my words from Twitter on them. Again: UUUUUGH.

I am not the only one who this is happening to. It is a VERY common practice that needs to stop.

Example #2:
I have also written tweets that other people/companies used to make memes and put THEIR names/tags on them. So each time the memes were shared, the people who took MY words without permission got new fans, got eyes on work I did. I lost out on gaining new fans. I lost out on my work getting in front of the eyes of people who might hire me to write for them (which is, in fact, my job).

Let me repeat: I am not the only one who this is happening to. It is a VERY common practice that needs to stop.

So in case you honestly didn’t know, copying the words someone else wrote—like a funny or relatable tweet—then pasting it into a tweet, status update, or meme of your own is actually stealing (and very uncool).

There are a lot of people out there who are professional writers (like me) who use Instagram, Facebook and Twitter to share short pieces of writing to entertain and engage our fans, build our fan base, and get the attention of people looking for writers. I have had my work make its way in front of the eyes of people who like it and are in the position to pay me to write for them, so reach out to hire me because they saw a snippet of what I can come up with on social media. THIS IS AWESOME.

My career as a writer depends on people sharing my words and people wanting to pay me for my words. So, please, think about that before taking the stance that it’s no big deal to “borrow” the words you like on social media. It’s so easy to share it in a way that ensures credit to the writer, and doing so makes them love you. And I can tell you from experience that feeling the gratitude of a writer who loves doing what they do is a beautiful thing.

Here’s a link to what happened on Twitter, if you’d like to show your support by liking or retweeting: #JokesArentFree 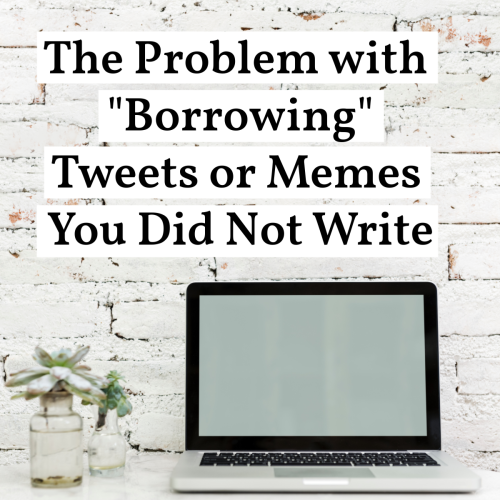 Kim Bongiorno is an author, full time freelance writer, and the blogger behind Let Me Start By Saying. You can find her on Instagram, Facebook and Twitter, hire her to write for you or speak at your event, or buy her a tall soy vanilla latte because they are delicious.

This site uses Akismet to reduce spam. Learn how your comment data is processed.